To understand the main differences between Garden Windows & Bay Windows, let’s look at their appearance and functionality and where one or the other is most often found. Bay windows stand out from the outside and are often installed in living rooms or bedrooms as they are a powerful source of natural light and an aesthetically pleasing detail of the interior and exterior. The aesthetic function of the bay windows is fulfilled by their unusual appearance, which is attractive and elegant for flats, houses and cottages. Bay windows consist of one window in the centre and two on the sides. The operating sashes in bay windows can be either central or side ones, depending on the functional tasks and wishes of the customer. You can read more about bay windows in the corresponding section.

Garden windows as well as bay windows stand out from the outside: their construction forms an additional element added to the façade. The central window protrudes to the outside, while the adjacent side windows are at a 90-degree angle, with another window at the top allowing even more light to enter. The side sashes and the top sash of the garden window usually act as working sashes. 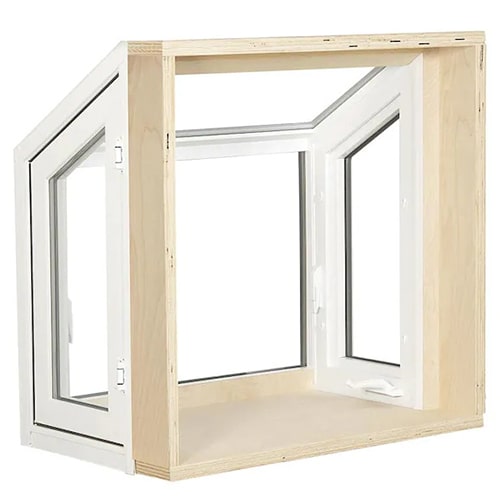 Bay windows are installed wherever an additional source of light and ventilation is required, and also when the design or architectural features of the room require it. Bay windows are endowed with excellent aesthetic qualities, are trendy in terms of style. They are robust and resistant to external influences, with high energy efficiency and noise insulation properties due to the use of high quality profiles, innovative Viridianglass, and high quality seals.

Bay windows differ from garden windows in that the spatial niche is not as large as its counterpart. A bay window is more of a window and less of a greenhouse, as is the case with garden windows. Outside space, bay windows do not extend as far as garden windows. The latter have a trapezoidal shape with an additional sash at the top, which allows the rainfall to run down the window smoothly: the angle of the slope does not allow the water to accumulate.

Our operators will answer any questions

The advantages of bay windows:

Garden windows are notable because they are an ideal space for houseplants, which need plenty of light, warmth and air, especially when it comes to home-grown greenery or vegetables. Garden windows can also be an eye-catcher in the kitchen interior.

Our company is a leader in the manufacture and installation of uUPV windows. Our production is equipped with modern machinery, thanks to which we undertake individual projects of varying degrees of complexity. Our bay windows undergo quality control during assembly, as do our garden windows. This approach ensures durability of each construction and easy usage for the customers. The bay windows are state of the art and will be a great addition to your interior. If you would like to order garden windows, our managers will advise you and show you the most popular types and configurations. Prestige Plus offers:

Vadim Mineev Prestige Plus did a fantastic job installing the double glazed doors and windows in my house. I needed the job to be completed urgently before moving in. And they managed to manufacture and install the windows even before the deadline! Alex and Sergey are the top notch pros who know the business and can give you valuable tips on how to save your money. Their installers (Mariusz, Esther and the others) were very skilful. I’ll be definitely using their services again when I need to replace more windows! I highly recommend Prestige Plus for the door and window installation services!
Maria Mihailov Great product and exelent service. It has been absolute pleasure to deal with Alex, Serg and their team in replacing all our windows and sliding door. Installers were highly professional and did exelent job. I'll definitely be recommending Prestige Plus to family and friends.
George Kay I made the decision to double glaze my windows due to street noise directly outside. For the first time since I bought my apartment I feel relaxed at home. Such a relief. Thankyou to the team who went above and beyond. Highly recommend.

Our MissionOur Process Our Team Reviews Terms And Conditions Of Trade

Delivery and Installation Warranty and Service